Why Flossing is so Important 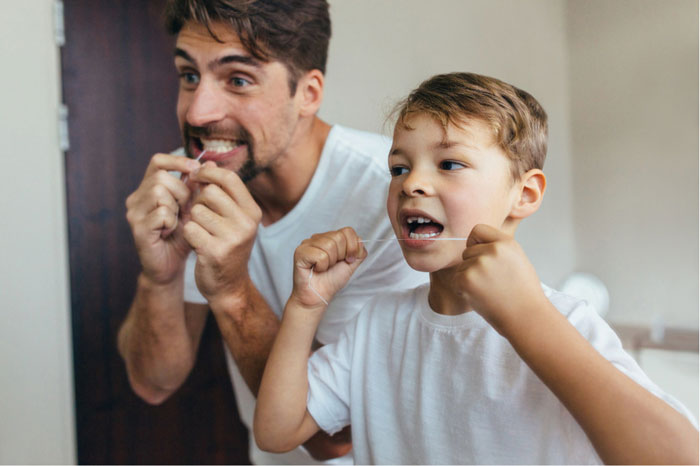 Most people detest flossing. Some report flossing hurts their gums. Others complain of blood emerging from the gums during flossing sessions. Furthermore, flossing requires more effort than brushing so some are inclined to skip it, assuming brushing will suffice. Though flossing is not fun, it is critically important for maintaining oral health.

Much was made of the Associated Press story from a few years back that claimed there is minimal proof flossing actually works. Those behind this controversial report insist there is no scientific research that shows flossing helps combat gum disease and/or cavities. Though there is not an abundance of scientific evidence that flossing is essential for oral health, few people have attempted to prove flossing works. There has not been a major push for numerous scientific studies on this subject as nearly everyone who understands the nuances of oral health agrees flossing is important for the gums and teeth. Furthermore, it is important to point out the Journal of Dental Hygiene has shown flossing and brushing the teeth with a soft-bristled toothbrush decreases gingivitis at 1, 3 and 6-months.

Flossing Might be a bit Painful yet It is Absolutely Necessary

It is awfully easy to overlook the first signs of infected gums as few people look closely at the interior of their mouth when in front of the mirror. Even if your gums feel fine and they do not appear to have changed in appearance, you should still floss. Your gums will likely feel tender or possibly even bleed after going several days, weeks or months without taking care of your teeth. This tenderness and blood is a sign you might have infected gums. Fail to floss and you might even see pus form in certain portions of your mouth. There might not be considerable pain or clear signs of issues until gum disease has advanced. If gum disease continues to progress, your teeth will eventually loosen and prove extremely painful. You read that last sentence right: the failure to floss really can cause you to lose your teeth.

A Look at What Happens When You Don't Floss

Those who do not floss two times per day allow food particles, bacteria and biofilm to remain in the mouth, wreaking all sorts of havoc. If these particles are allowed to remain between the teeth, gingivitis and cavities will inevitably arise. Flossing is essential to removing the built-up dental plaque. More than 1,000 bacteria reside in dental plaque. This bacteria irritates gum tissue, making it inflamed, red and bloody. The result is even more gingivitis and bacteria.

Most people assume cavities form on the teeth. This is certainly true yet cavities can also form between the teeth. The dental plaque that leads to gingivitis can also spur the rise of nasty bacteria that attacks the enamel between the teeth, creating a cavity. Cavities have the potential to spread to adjacent teeth, causing that many more oral health problems.

Flossing is the Perfect Complement to Brushing

Can you imagine washing one side of your silverware and leaving the other side dirty? This is similar to what is happening when you brush your teeth and skip flossing. Brushing only cleans the front, back and top portions of the teeth. Unfortunately, there is plenty of gunk trapped between the teeth that toothbrush bristles cannot reach. Floss is necessary to clean out these tightly-packed spaces. Furthermore, floss is capable of cleaning out those cramped spaces between the gums and the teeth. Bacteria and plaque form in these spaces. These unsavory particles will remain concealed and create all sorts of dental health issues down the line.

Flossing Prevents the Formation of Biofilm

Flossing breaks apart the disgusting biofilm along the teeth that is rife with plaque and bacteria. This film develops after insufficient or non-existent oral care. If bacteria-laden biofilm is permitted to remain on the teeth, it will eventually colonize and alter the chemistry of the mouth, helping pathogens thrive. If such a scenario unfolds, you will be at risk for a nasty infection or even disease of the mouth structures that support the teeth.

If you have bad breath, also referred to as halitosis, you are likely self-conscious. You probably hesitate to speak when in the vicinity of others. Perhaps you pop breath mints or gum into your mouth throughout the day to mask the odor. This is no way to live life! Start flossing and you will find your bad breath is no longer as harsh. Continue flossing and your halitosis might even completely dissipate.

Flossing sends those tiny pieces of food and bacteria stuck between the teeth flying out of the mouth and into your sink. Just be sure to tilt your head down toward the sink so all those odorous bits of food end up going down the drain rather than on your bathroom mirror. This is not to say you have to floss after every single meal. Rather, you should floss at least two times per day: once in the morning after eating breakfast and once in the evening after dinner. If you have the time, go ahead and floss after each meal just to be safe rather than sorry. Rinse your mouth with mouthwash following your flossing sessions and your breath will smell that much better.

If you have not been to the dentist in the past six months, it is time for an examination and cleaning. Reach out to our dental office at (808) 877-8090 to schedule an appointment. Our dentist and dental hygienists will be happy to tell you more about the importance of flossing as well as other oral health practices you can implement with ease.

DentalROI provides relevant dental content to help providers educate patients. The statements, services, and products referenced in this article have not been evaluated by the Food and Drug Administration, and they are not intended as a substitute for professional medical advice, diagnosis, or treatment. Always seek the advice of your dental provider with any questions or issues you may have. Specific recommendations may vary in different circumstances, so individual consultation is important.

We are here for you. We understand times are changing. A New reality is upon us…

“Safety First” has been our #1 priority.

Your trust is literally in our hands and we gladly accept this responsibility.

We are empathetic to patient needs and we respect everyone’s decision to seek dental care, whether now or later.

We appreciate our Smile Hawaii Ohana and plan to continue providing even better care than ever before.

Me Ke Aloha and A Hui Hou